The Educational System of Great Britain

The educational system of G.B. is extremely complex and bewildering. It is very difficult to generalize particular types of schools as schools differ from one to the other. The department of education and science is responsible for national educational policy, but it doesn’t employ teacher or prescribe curricula or text books.

Each school has its own board of governors consisting of teachers, parents, local politicians, members of local community, businessmen and sometimes pupils. According to the law only one subject is compulsory. It is religious instruction.

Schooling for children is compulsory from 5 to 16, though some provision is made for children under 5 and some pupils remain at school after 16 to prepare for higher education.

The state school system is usually divided into 2 stages (secondary and primary). The majority of primary schools are mixed. They are subdivided into infant schools (ages 5 to 7), and junior schools (ages 7 to11). In junior schools pupils were often placed in A,B,C or D-streams, according to their abilities. Under the pressure of progressive parents and teachers the 11+ examination has now been abolished in most parts of the country. There are several types of schools in G.B. Grammar schools provide an academic cause for selected pupils from the age of 11 to 18. Only those children who have the best results are admitted to these schools. They give pupils a high level of academic education which can lead to the university.

Technical Schools offer a general education with a technical bias and serve those pupils who are more mechanically minded. The curriculum includes more lessons of science and mathematics. Secondary modern schools were formed to provide a non-academic education for children of lesser attainment. The curriculum includes more practical subjects. Comprehensive schools bring about a general improvement in the system of secondary education.

Education in the USA

The American system of school education differs from the systems in other countries. There are state public schools, private elementary schools and private secondary schools. Public schools are free and private schools are fee-paying. Each state has its own system of public schools. Elementary education begins at the age of six or seven, when a child goes to the first grade (form). At the age of sixteen schoolchildren leave the elementary school and may continue their education at one of the secondary schools or high schools, as they call them. The programme of studies in the elementary school includes English, Arithmetic, Geography, History of the USA, Natural Sciences and, besides, Physical Training, Singing, Drawing, Wood or Metal Work, etc. Sometimes they learn a foreign language and general history. Besides giving general education some high schools teach subjects useful to those who hope to find jobs in industry and agriculture or who want to enter colleges or universities. After graduating from secondary schools a growing number of Americans go on to higher education. Ссылка: https://www.native-english.ru/

It is within the competence of the local authorities, and therefore it may differ from province to province. For example, Newfoundland has an 11-grade system. Some other provinces have 12-grade systems, and Ontario has even a 13-grade system. Grades 1—6 are usually elementary schools, and grades 7—12 are secondary schools. In some provinces there is a kindergarten year before the first grade. Elementary education is general and basic, but in the junior high school years the students can select some courses themselves. Most secondary schools provide programmes for all types of students. Some of them prepare students for continuing their studies at the university. Vocational schools are separate institutions for those who will not continue their education after secondary schools. There also exist some commercial high schools. Some provinces have private kindergartens and nursery schools for children of pre-elementary age. There also exist Roman Catholic schools and private schools in some provinces. In most provinces private schools receive some form of public support. Admission to the university in Canada is after high school with specific courses. Getting a degree in law, medicine, dentistry or engineering usually takes 3—4 years of studying. University tuition fees vary among different provinces. All provinces also have public non-university institutions. They are regional colleges, institutes of technology, institutes of applied arts, colleges of agricultural technology and others. Criteria for admission to these institutions are less strict.

Citizens of Russia have the right for education which is guaranteed by the Constitution. The public educational system in our country incorporates pre-school, general school, specialized secondary and higher education.

Pre-school consists of kindergartens and creches. Children there learn reading, writing and arithmetic. But pre-school education isn’t compulsory — children can get it at home.

Compulsory education is for children from 6(7) to 17 years of age.

The main link in the system of education is the general school which prepares the younger generation for life and work in modern production. There are various types of schools: general secondary schools, schools specializing in a certain subject, high schools, lyceums and so on. Tuition in most of them is free of charge, but some new types of schools are fee-paying. The term of study in a general secondary school is 11 years and consists of primary, middle and upper stages. At the middle stage of a secondary school the children learn the basic laws of nature and society at the lessons of history, algebra, literature, physics and many others.

After the 9th form pupils have to sit for examinations. Also they have a choice between entering the 10th grade of a general secondary school and enrolling in a specialized secondary or vocational school.

The educational system in Kazakhstan is conducted in two languages — Kazakh and Russian and consists of several levels of state and private educational establishments: infant schools, elementary (or primary) schools, comprehensive schools, colleges and academies. The constitution of the Republic of Kazakhstan fixes the right of citizens of the republic on free-of-charge secondary education which is obligatory. The constitution prohibits any discrimination on the basis of language or ethnicity and guarantees equal rights in education regardless of nationality. Children start school at the age of 7 and finish at 17. As a rule a child attends the school, located in the neighborhood. However, in big cities there are so-called special schools, offering more in depth studies of the major European languages (English, French,  German) or the advanced courses in physics and mathematics and children, attending one of this may have to commute from home.

The first stage of education in Kazakhstan is elementary (or primary) school for grades one through four. The second is secondary school for middle grades from five through nine. Upon graduation from secondary school students are given the choice of either continuing to attend the same school (high school -senior grades 10-11) or entering a vocational or technical school. Both of these schools are meant to provide one, along with the certificate of secondary education with a number of useful skills (e.g. those of an electrician, technical or computer operators.) Having completed one’s secondary education, one can either become a part of work force or go on college (institution of higher learning-Institute). 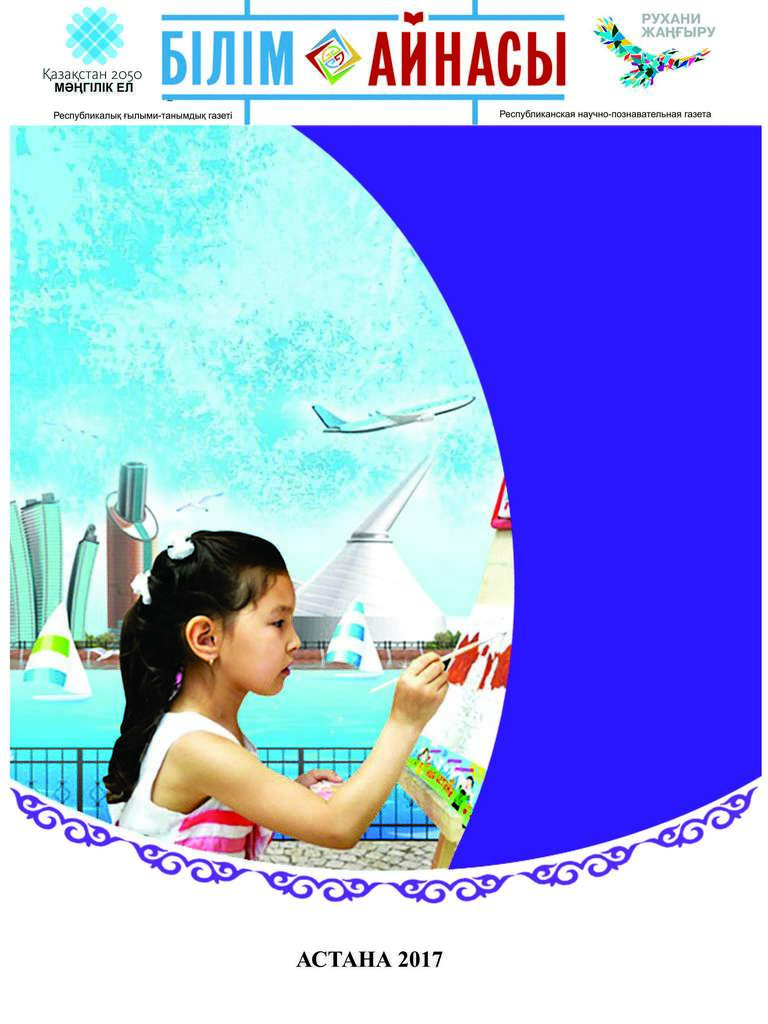